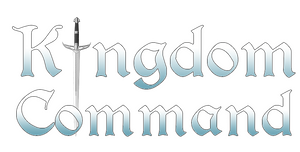 You start with a single castle. If you capture enough castles (which depend on the map), you win the game.

On your turn, you will do four things. Train units, order other units to move, buy scrolls and cast spells.

Each castle you own can produce 1-6 units each turn. Your home base can produce 2, and the castles you capture start with a production of 1, but all can be upgraded. Units are paid for when the training starts, but are not ready until the next turn. If the castle is captured before then, no units are produced, and no refunds are given!

Units may also be ordered to convey using friendly ships. To convey, the unit must be adjacent to the ship area. The ship can load, move and unload the unit in the same turn. The ship can also go on longer expeditions, with the unit still on board. If your ship is lost in combat, any units on board are lost. Each ship can hold units up to its capacity (1-3). Loading and unloading units takes 1 movement time each.

Each round a set of random scrolls are offered at the market, with random prices. You can buy these and gain access to them immediately. Some scrolls allow you to build buildings onto the map that gives certain bonuses. Like using scrolls, buildings are built instantaneously. Among scrolls, there are dragon eggs and blueprints. These can be used to build dragons and galleons in a castle.

Every third round, a random Tech is available for research. Research costs money each round and cannot be aborted. A tech gives a permanent bonus for the rest of the match.

Certain units may cast spells that either give bonuses or negative effects to units.

Once all players have submitted their orders, all orders are executed simultaneously. The turn resolution is performed in the following steps:

If there are mages in the game, the turn begins with the mages casting their spells.

All units move according to their given order a half area at a time. Thus a unit moving from A to be will first be at A, then in-between A and B, then at B. If, at any time, enemies are encountered movement will stop, with the exception of units meeting in between A and B. Such in-between meetings will result in an immediate battle and the winner continues to move to the next region in their move orders. If the units were injured in the skirmish battle and is part of a new battle, they will begin that battle injured.

When all movements are finished, battles will occur in all locations where there are forces of different kingdoms present. After battle at most one kingdom will be present in each area.

Areas may be taxed if you own the region. Regions are captured with units.

Each unit has an upkeep that must be paid with gold. If there is not enough gold to pay the upkeep, you must begin the next turn by disbanding units until the debt is paid.

Finally, new units are built in each castle that had build orders and have not switched owners during the battles.

If units belonging to different kingdoms meet during a movement, an automatic battle will occur. A battle round consists of 1) Units deal damage and 2) Units are eliminated. The battle will continue until one kingdom has no units left in the battle, or all units have been eliminated. At the end of the game turn, all units that were injured are healed.

Each unit deals damage equal to its attack value. If there are multiple units to choose from, injured units will be prioritized, then cheaper units over expensive ones. If a unit is killed, any remaining damage will be dealt to the next unit.

If a unit suffers as many hits as hit points, it is eliminated and will not participate in further battle rounds. Note that all units in the current round will deal its damage.

Greg’s knights deal 2 damage each to Scott’s swordsmen, taking out 2 swordsmen. Greg’s swordsmen deal a total of 3 damage, killing one swordsman and injuring another. Scott now has 1 normal and 1 injured swordsman remaining.

Scott hits back with all 5 swordsmen, a total of 5 damage which kills 2 of Greg’s swordsmen and injures another. Greg now has 2 knights and 1 injured swordsman.

Greg’s knights deal 2 damage each to Scott’s swordsmen, and his swordsman deal an additional 1 damage, for a total of 5 damage to Scott’s army, enough to kill it.

Scott’s 2 swordsmen deal one damage each, killing the last swordsman but not enough to kill a knight.

Greg is victorious with 2 knights remaining. The injured unit heals at the end of the game turn.

Dragons can move on both land and water. Can neutralize, but not capture territories.

Have no fighting power the turn it is being built (indicated by an uncomplete tower).

Any unit that enters the fog can not move out until the next turn.

Deals 2 damage to enemy ground units in a region

Improve Defense
Increases the attack value of a castle by 1. Use in a castle. Each castle can only be upgraded once per turn.

Sawmill
Is built in a region by a soldier or knight. The region must not have any other buildings. Increases the gold yield of that region by two. The price of the sawmill increases by 2 for each sawmill already owned by you.

Market
Gives the bonus effect that all your castles yield 1 extra gold each turn. Only one market can be bought.

Dragon Egg
Allows you to build a dragon. Use it in a castle, it will produce a dragon in 2 turns.

Galleon Blueprint
Allows you to build a galleon. Use it in a castle, it will produce a galleon in 2 turns.

Build Guard Tower
Allows a soldier or knight to build a guard tower in the region it is in. The unit can build and move the same turn.

A: The ship will be built and the units will coexist in the same region for half a movement round. If both stand still or move the same direction, they will engage in combat.

A: If given a move order, and a cast spell order, the mage will first cast the spell, then move.